The Reconstruction Has Begun - Spider 2.0 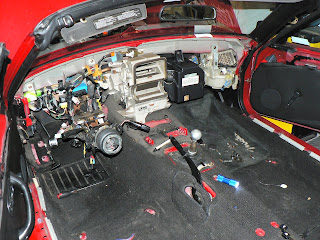 At long last I've returned from the United Kingdom, land of small cars and narrow but wonderfully curvy roads. Upon my return I have immediately undertaken the biggest project I've ever done on my venerable old '94 Miata, "Spider". I've talked about it in previous blog posts but basically this car has been rode hard and put away wet for the last 14 years and a bit neglected on and off during those years when other things took precedence in my life. So in the interest of keeping this car for another 10 years and not being ashamed to drive it (aside from the whole Man Driving a Miata stigma), I've decided to just take it completely apart and put it back together with new parts.

So the plan is to take the interior apart, seats and dash out, with the goal of fixing the cracks in the dash, replacing the heater core (a leak is an eventual certainty), refurb the gauges and switchgear, do something about the seats (the leatherette covers are not holding up well) and yank the soft top out permanently and generally just clean everything up.


Then, the engine is coming out so that I can work on it easier. The goal is to replace the clutch/flywheel with a lightweight flywheel, fix the BIG oil leaks the car has had for the last few years, clean everything up, install a refreshed cylinder head, and while the engine is out, paint and recondition the engine compartment. 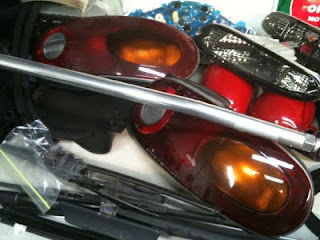 Meanwhile, in what is probably going to be the largest part of the job, the exterior is going to get painted. I have some small dents to fill, and I'm going to eliminate the badging on the car. I have not yet decided on a color but I do think I will be changing the color from the factory red. Finally, when it all goes back together, new wheels and tires will complete the package.

Fortunately, the suspension, exhaust, and electrical in the car do not need much if any work. Just a general cleaning up. I've also got a Flyin' Miata frame rail reinforcement brace kit on order, to restore some of the stiffness the car has lost over the years.

As you can see from the photos, the dis-assembly of the car is well under way. The seats and dash are out and almost all of the exterior trim is off.