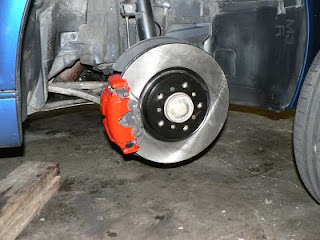 The project of the weekend was some new brake pads and rotors on the BMW M3. You can spend thousands of dollars on brakes for these cars, but the stock brakes are not bad by any stretch of the imagination. Rather than bling it up with fancy cross-drilled and/or slotted rotors that sell for several hundred dollars EACH, I went with an OEM equivalent rotor by Centric, purchased from rockauto.com for a handy $62 each. I've bought lots of rotors before and these are the nicest I've ever gotten. The hub area and hat are coated in black, as are the outer edges and the insides of the vanes in the vents. That pretty black paint may burn right off under track use, but should last a long time and keep the hubs looking nice for a while with street use.

For pads I went with another OEM equivalent from Ate (pronounced AH-tay). I've been using Ate's high performance brake fluid in my racing cars for years, but had never tried their OEM replacement parts before. Much to my pleasure and surprise, when I pulled the old pads off I noted the name Ate on the original pads, clips, and yes - even on the M3's calipers. So these aren't just OEM-equivalent. Ate is an OEM supplier to BMW.

Anyway, you can see from the photo that I also painted the calipers red. It's overdone, I know, but I like it and that's all that matters. The calipers were slightly rusty and not looking great, so the paint freshens things up a bit. I used some Dupli-color ceramic caliper paint, applied with a small brush.

So far life with the M3 has been pretty good. No mechanical problems have come up, but I've done a TON of maintenance, cleaning, and general refurbishment. One of the best improvements I made was fixing the sunroof headliner. It is supposed to slide back and forth under the glass moonroof. The tiny plastic guides that it slides on had long ago left their stations and the headliner was now all loose and floppy and wouldn't open more than a couple inches. For about $25 in parts and an hour of my time, the sunroof now operates as it should and there's no more flopping around above my head. Now that the brakes are up to snuff, my only remaining mechanical concern is an oil leak that I need to chase down and fix, and doing a flush of the cooling system.