A Step Back in Time to My Great Uncle's Service Station 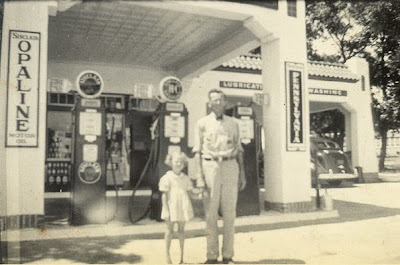 This photo is shows my great uncle Dutch at his Sinclair station in Gulfport, Mississippi circa 1938. Based on the signage on the building, this is one of the Sinclair "castle" style stations built by the thousands between 1931 and 1940. The car in the background is a 1937 or 1938 Chrysler. I only have very faint memories of Uncle Dutch, as he passed away when I was a very small child in the 70's, and then I believe he was pushing 90 years old. The little girl is his daughter Caroline, whom I remember very well. How I wish I could go back in time and pay a visit to this old gas station!
Posted by Morrison's Garage at 3:52 PM No comments:

So my wife and I have invented this game we play whenever we are in the car. It's similar to the old "Slug Bug" game where every time you see a VW Beetle you yell "Slug Bug!" and punch the person next to you in the arm or leg as hard as you can. This version doesn't require anyone to get punched. In fact, my wife specifically objected to the prospect of being punched, and I am not really for it either, so our game is much more friendly. It sort of evolved naturally when we were shopping for cars a few months ago. The Nissan Juke was one of the cars my wife was interested in for her daily driver. I just got in the habit of calling out whenever we would see one on the road. It's so quick and easy to say "Juke!". It's kind of fun, too! 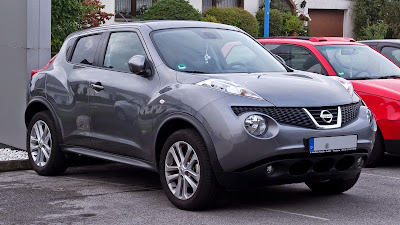 Well, after a while we bought the Mazda3 for her and even though we were no longer shopping for cars I couldn't stop myself from yelling "Juke!" every time I'd see one on the road. You can probably guess what happened next, but Jen is pretty competitive by nature and pretty soon she was trying to spot the Jukes before me and beat me to the "Juke!". Naturally, we started keeping score and the game of Juke was born.

The Juke is the perfect car for this game because 1) it's quick and easy to blurt out "Juke". It wouldn't work with car like a Camry or an Explorer. 2) Jukes are common enough (around here anyway) that you do see at least one most times you go somewhere. 3) Jukes are rare enough that you feel like you've accomplished something when you spot one. You don't see them at every intersection like more common cars. Sometimes we will drive for an hour in city traffic and only see one. 4) The Juke is really weird looking so it stands out in a crowd. 5) Some of Nissan's other models have some common styling elements to the Juke, so you have to really look before you yell "Juke!" because it might be a Rogue or a Leaf.

The scoring method isn't critical. Play however you like. We just found that we needed to define an end to the game so that if one player gets way behind there's a way to wipe the slate clean and start a new game. If you get 10 Jukes behind you'll never catch up.

What do you get when you win? This is up to you but we decided that the loser has to make the morning coffee and being it to the winner in bed for the next weekend. It's not much but the game is a LOT more competitive when there are stakes, no matter how small.

Caveats
It's possible in other parts of the USA there are not enough Jukes to make this game fun. In that case I'd suggest changing it to something more common - perhaps Jeeps, but they may be too common.
Play safely! Don't get in a wreck because you're scanning all over for Jukes. Most often you'll see them in oncoming traffic. Stay in your lane and don't rear end the guy in front of you because you were looking off to the side. 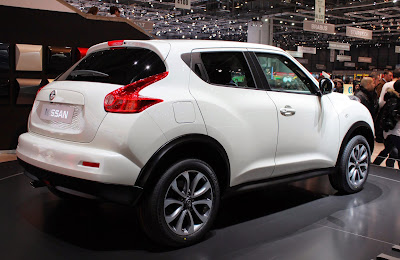 Here's a side rear view of a Juke, to help you spot them. 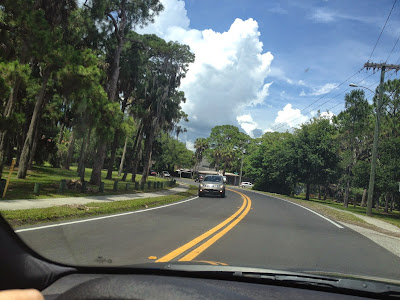 Here's a front view of an approaching Rogue at a distance. These are easy to mistake for Jukes if you try to call it too quickly. Be careful!

Give it a try and let me know how you like The Juke Game. My wife and I often end up laughing til we cry, as we try to out-Juke each other. Maybe we're just weird, though.

Posted by Morrison's Garage at 2:52 PM No comments: