Acceptable jacking points on a '90-'05 Miata

I lifted this image from a post at Miataforum and added some additional jacking points that weren't called out in the original image. You can tell which ones I added because they look like they were drawn by a 6-year old.

The four inner-most points indicated in the image are at the ends of the "frame rails" which are actually just floor panel stiffeners. Jack right on the ends of them where they are stronger, where the yellow ovals are in the image.
Posted by Morrison's Garage at 9:02 AM No comments:

Email ThisBlogThis!Share to TwitterShare to FacebookShare to Pinterest
Labels: miata 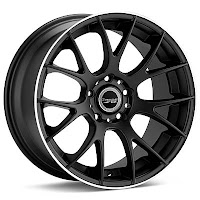 So it was time for some new tires for the M3. The Nitto Invo tires it came with were almost down to the wear bars and getting really hard and noisy. I had put almost 20,000 miles on them and they weren't close to new when I got them. I took the opportunity to update the looks of the car as well by adding a set of Bremmer BR05's to my order from The Tire Rack. The BR05 is basically a reproduction of the wheels BMW put on the CSL version of the M3. Well, not really a reproduction but I guess a reasonable facsimile without the associated cost. These are only about $660 a set in 18" size. They are 18x8 in the front and 18x9 in the back, exactly like the factory wheels my car came with. I think the offset in the front is a little bit less than stock because it looks like the wheel sticks out just a bit more. I'll have to look up the exact numbers and see for sure.

The black finish is something different for me and I really like the slim machined lip around the outside of the wheel face. The tires are Sumitomo HTR ZIII in 225/45ZR-18 in the front and 255/40ZR-18 in the back. They came perfectly balanced from Tire Rack and ready to mount. The Sumitomos are an underrated tire in my opinion. The Boxster I had came with them and I thought they were great, and the price is very reasonable at around $600 for the set in M3 sizes. They aren't for autocrossing or track days, but for street driving they are a great value.
Posted by Morrison's Garage at 5:47 PM No comments:

Early Miatas came with an excellent AGM type battery that has been known to last upwards of 10 years with proper care and feeding. As nothing lasts forever, sometimes a replacement battery is needed. I've relied on a battery from Westco for many years. It's pretty much a direct fit for the Miata and uses the same AGM technology which is better and safer for the Miata's battery location in the trunk of the car.
As much as I'd like to continue to buy Westco batteries, I have to be fiscally responsible and ensure that I'm getting the best value for my money. So, I shopped around and found the Marathon battery being sold on Amazon.com by a company called Battery Mart (just search for "miata battery" on Amazon and it will come up). It is an AGM battery and with the exception of the top cap, looks to be pretty much the same battery as the Westco. The part number - 8AMU1R - confirms it. It's the same East-Penn Deka battery as the Westco. The Marathon version was $79.95 plus $23.50 for shipping. The Westco generally sells in the $120 range, before shipping, however I did find a good deal here at $99 and $9.95 for shipping, which puts the Westco only $10 more than the Marathon.

The service from Battery Mart was good. I ordered the battery on Monday and it arrived on Thursday, triple-boxed and well padded.
Posted by Morrison's Garage at 10:22 AM 2 comments: