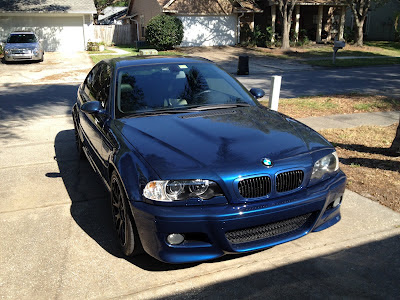 I got my M3 back from the body shop today. The work was done by Gene Perez Body Shop in Tampa and I'm perfectly happy with the work they did. They did a good job of communicating with me and provided a high level of service. It was relatively quick and painless and the other guy's insurance picked up the entire tab. 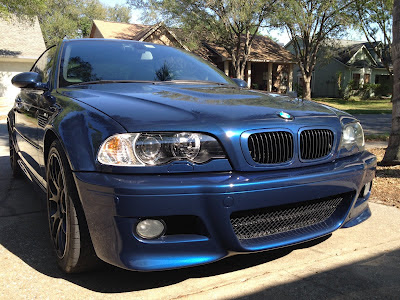 The repair total came to just over $5100. This included a new fender, bumper cover, right headlight, and some other miscellaneous bits needed to put everything back together. They blended the color in to the door and hood and it looks to me like a perfect match. 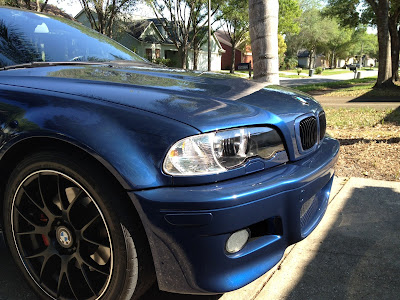 The only issue is that now the left headlight lens looks shabby compared to the new one so I've ordered a new lens for $57. I also need to replace the fog lamps because they are very road-rashed and now look very bad compared to the rest of the car, which looks brand new! 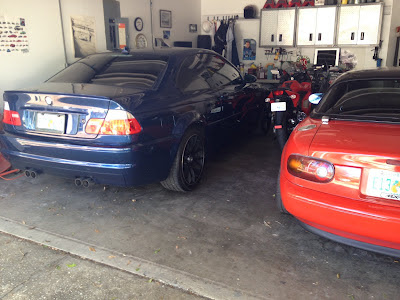 It's good to have all my toys back in the garage. It's been 3 weeks to the day since the accident. It's strange where one finds comfort. I've had some difficult times the past few weeks and these machines in my garage make me a little bit happier.
Posted by Morrison's Garage at 8:44 PM No comments: 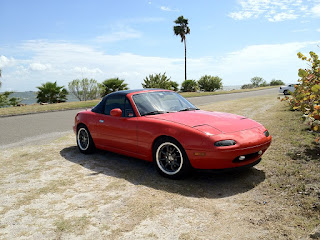 Now that my fuel line blues have been solved, it was great to get the car out for a drive today. It was almost 90 degrees! I also got a new iPhone 4S, so I'm enjoying using it for higher quality photos and videos for my blog. Most of the photos used on this blog have been taken with an iPhone. Some were taken with a point and shoot camera but I find the iPhone photos are more than acceptable for my purposes and especially now with the new one, the photos are quite nice.
Posted by Morrison's Garage at 10:37 PM No comments:

I've been waiting to post this until I had a definitive solution, but if you look a couple blog posts back you'll see my car on the back of a flat bed. The issue that cropped up was the fuel lines simply let go from the fittings on the fuel rail and I couldn't get them to hold on no matter what I tried. This led me down a path of learning more than I ever wanted to know about high pressure fuel injection hose and what type of hose is proper for this installation. Maybe this was obvious to everyone else who has done the '99 head swap but in all my reading about the subject I never saw it mentioned and I did find a few posts from people who were having trouble with leaking fuel hoses. 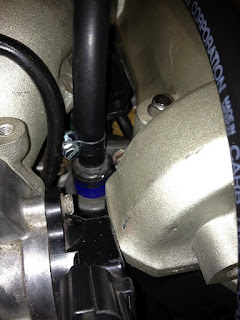 In this photo you can see the fuel pressure regulator. When installing the '99 Miata head on the '94 block, it's necessary to use the '99 fuel rail with the '94 fuel pressure regulator (FPR) because the '99 is a returnless system, while the '94 uses a return to the fuel tank from the FPR. The '94 FPR can only be oriented one way, due to a vacuum port that has to face out. That's no problem, but it dictates the routing of the fuel hoses. You can see this one sticking straight up, and the other one sticks straight down. The '94 fuel rail has an input that has a flared end on it so the fuel hose with a clamp on it will be nice and tight. The '99 uses the newer style fittings that click into place and require a special tool to remove, so the input to the rail has NO FLARE. The '94 FPR has an output on it that is flared, and so must be a clamped connection. Being ignorant when I embarked on this project, I blithely bought the first spool of high pressure fuel hose I found online and simply clamped the hoses to the fuel rail connections and on the other end to the fuel hardlines from the tank. It worked for 2000 miles. 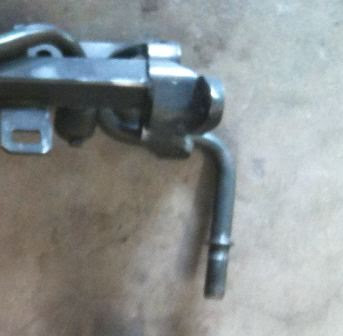 Here's a view of the '99 fuel rail input. This is not designed for a clamped connection. After 2000 miles (about 5 weeks) of use, the fuel hose fell off and no amount of tightening of the clamp would hold it on. Even after replacing with a new length of hose, it would not stay on. The resulting spray of fuel in the engine compartment was quite undesirable! Interestingly, the hose on the '94 FPR fitting with the flared and clamped connection was leaking too! This meant that my problem was two-fold. 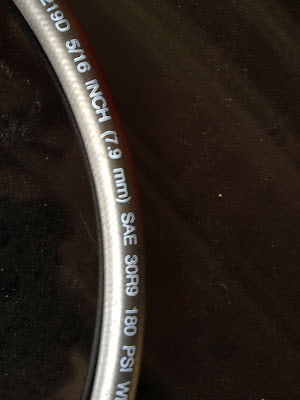 After doing a bit of research, I found that there are a multitude of SAE specifications for fuel hose. There is hose designed for high pressure (injected) applications, hose designed for clamped connections, and some for connections using barbed fittings (picture below). Some hose is designed to be compatible with diesel, gasoline, and ethanol, some is not compatible with all of those. So, you really need to understand the specs and make sure you get the hose for the application. Any fuel hose you buy will comply with one of these specs, however when buying online the spec is very often not indicated and you don't know what you're going to get. The hose pictured here is the "right" hose to use in this application. The spec is SAE 30R9. It is designed for a clamped application, high pressure, and low permeability to petroleum distillates (to meet environmental regulations). The original hose I bought was SAE 30R7, which is all of that, but NOT for a clamped application. This is why it eventually let go from my FPR fitting, even though there is a flare there and the clamp was tight. On the fuel rail supply fitting it was even worse. The lack of a flare meant there was no chance of it staying put and on my second try with this hose it fell off after literally 5 minutes of running. 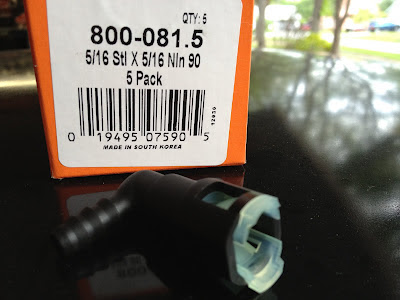 So here's the fix. For the '94 FPR connection, it's important to use SAE 30R9 fuel hose (Gates P/N 27085), so the clamped connections will work. For the '99 fuel rail input, the 30R9 hose is fine, but you need to make the connection with one of these. It's DORMAN part number 800-081.5. It's a nylon 5/16 inch 90 degree barbed fitting. It needs to be 90 degrees because the space under the fuel rail is very tight and a straight fitting doesn't fit. I got 5 of them from Autozone online for about $12. It was a special order item so I'm not sure if you'll find them at your local store. 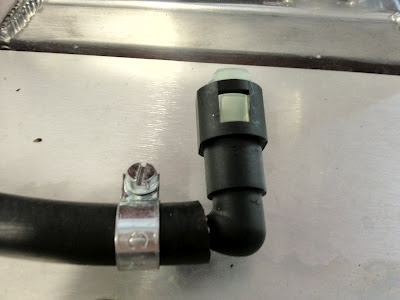 Here's the assembled hose and fitting. It JUST fits in the space under the fuel rail. The connector gives a very reassuring and positive click when engaged. 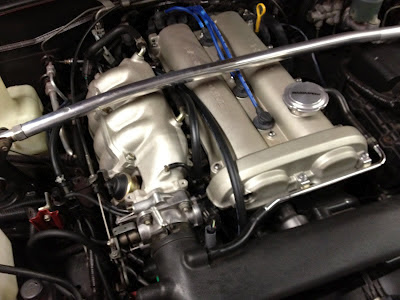 This shows how I ended up routing the hoses. It had to change a bit with the 90 degree bend at the end of the supply hose. From the hard lines on the left, they both run back behind the intake manifold and then run forward right on top of the fuel rail. Finally, the supply line goes forward and makes a gentle 180 to go under the end of the fuel rail and make the supply connection. It's not ideal as I'd rather the fuel hoses were more concealed, but I had to take the route with the least sharp bends and the right approach direction to the fittings. You might find a suitable route under the intake manifold, but there's very little room to make the connection down there and I was being conservative because I needed this to be fixed!
Posted by Morrison's Garage at 10:05 PM 4 comments:

Not What I Needed 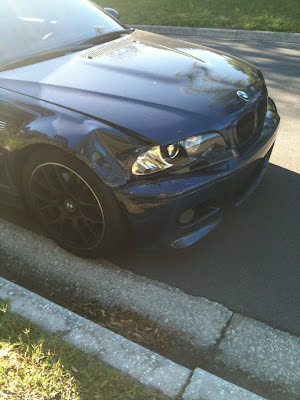 From the department of crap that I really don't need right now: a Lexus pulled right out in front of me on my way to work two weeks ago. I had nowhere to go and not enough room to stop, so this was the result. The insurance estimate is $4600. 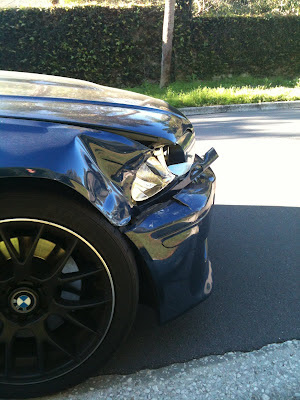 It actually could have been a lot worse. The airbags did not deploy. At least I'll get my front bumper freshly painted. It needed it. 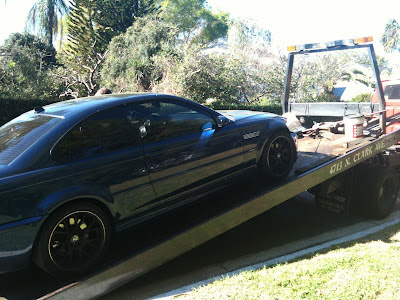 So I got to ride home in a tow truck twice within 5 days time. As of this writing the M3 is still in the body shop, but should be done this week. I've been driving a Chevy Impala rental, which I have not enjoyed at all.
Posted by Morrison's Garage at 10:15 PM No comments: