Depths of the Engine 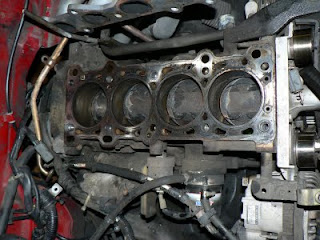 This weekend I got the head off the engine and I'm ready to continue pulling parts off the block and get it ready to come out as well. I'll pull the block and transmission together, most likely. Overall, the block looks fine. The cylinder wall don't show any scoring or ridges at all, and the cross-hatching is still visible in most places. I'm not planning to tear it down to take measurements because it still had great compression and didn't burn any oil before I started this whole thing. 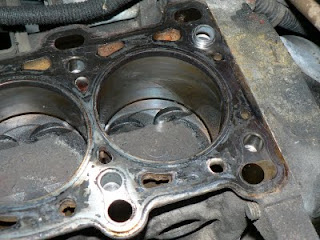 There's a bit of carbon on the piston tops, but not too much, and the valves and spark plugs look like the engine was running very lean, despite the fact that I thought I had fixed my lean running issue a couple months ago. For sure I was getting less pinging, but I think there may still be a problem. If it's an engine management problem then it will probably still be there when I finish this project because I'm not messing with that. 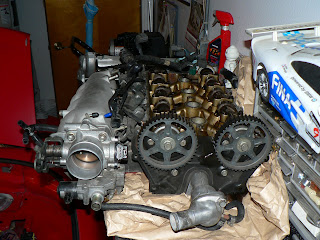 My good friend Steve offered up a complete cylinder head and intake manifold from a '99 Miata and I'm going to take him up on it. It's a direct bolt-on for this engine and the improvements Mazda made over the '94-'97 head (shown here) were extensive. It's probably good for 7-10 horsepower, which is a lot for these cars. So this head I just yanked out will probably not get reused. Neither will the '96 head I have that I was planning to use. So maybe I can sell both of those and recoup some of my expenses on this project. 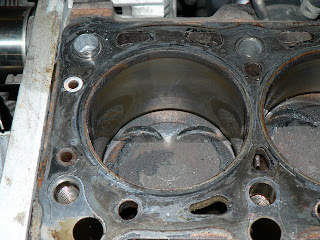 Next on the agenda is to get the accessories and the water pump pulled off the front of the short block, and continue stripping the engine compartment so I can paint it. I'm starting to order more parts for the mechanicals. Last night I ordered Mazda Competition motor mounts and a long braided clutch hose from 949 Racing. Also, in the interest of shaving a bit off the budget anywhere I can, I'm going with a clutch and flywheel package from eBay. It's an 11 pound flywheel (stock is close to 20) and an OEM equivalent Exedy clutch and pressure plate, all for under $300. Normally I'm plenty skeptical of cheap car parts, but these have gotten consistently good reviews on the forums so I'm willing to take a bit of a chance since it saves almost $150 over what I had originally planned to get. Also the frame rail reinforcement kit from Flyin' Miata is inbound on the big brown truck from Colorado.


The budget is starting to come into focus as well. Depending on how I cook up the numbers, and counting a few things I've already bought, assuming a budget of about $500 to paint the car myself, and budgeting for a new set of wheels and tires, the total comes to about $3500. Not a bad deal when you consider how cool this car will be and how it will be good for another 10+ years of worry-free driving. That's my theory anyway.

Here's a color I was toying around with. I used Forza on the XBOX to mock up the car with the color and a representative set of wheels. It's between this color and keeping it red. Keeping it red would certainly be less work.