Getting down to the nitty-gritty on the '94 Miata. This weekend I yanked out the shortblock and transmission together, separated them, and got the engine up on the stand where I can work on it. 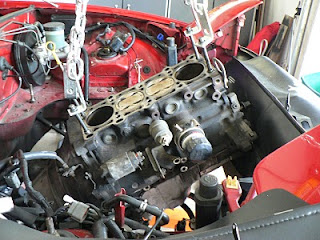 With the head off, I had nothing to hook onto with the hoist so I used four old head bolts threaded into the block. It worked like a charm and I was able to pull the whole assembly out by myself without any help. I did discover at the last minute that the hood had to come off, but it's only 4 nuts so I was able to take it off and get it out of the way easily.

Once the assembly was out, it was very easy to separate the block from the transmission. The hard part was then getting the flywheel bolts out. They are installed with quite a bit of tourque and the engine just wants to spin. My impact wrench is not a very good one (need to fix that) so it wouldn't budge the flywheel bolts at all. Absent an impact wrench, the only way to attack it is to somehow lock the flywheel so you can wrench on the bolts without the engine spinning. I did that using the attachment arms from my engine stand, but some steel strapping can be used to the same effect. From there, I used a breaker bar and the handle from my floorjack and was able to get the bolts loose. 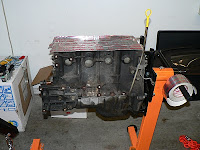 With the short block on the stand, I then cleaned the deck of the block and used some aluminized tape (not duct tape but the stuff A/C contractors use to seal duct work) to cover the top of the block so I didn't get water on top of the pistons in the next step. 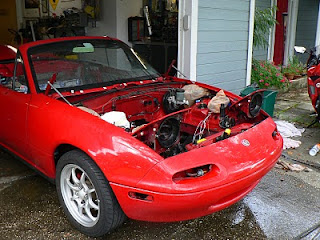 The engine bay is just about empty. I bagged the connector-ends of the wiring harness and covered the fuse block and the relays as best as I could. The next step there is to prep and paint the subframe and front suspension. Then paint the engine bay. 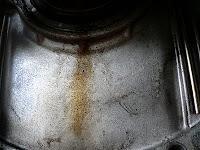 Just as I suspected there was a bad rear main seal leak. The bellhousing was very oily and messy. The clutch was fine, though. 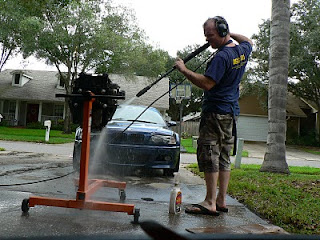 Nice clean tranny. I will probably paint it with Eastwood Aluma-blast.

Here's a few more photos in no particular order to help fill in some gaps. 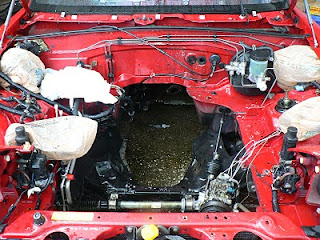 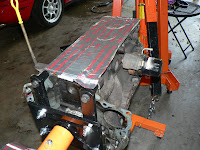 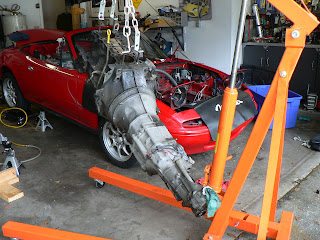