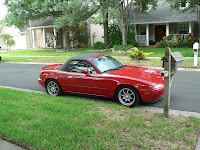 My 1994 Miata is showing its age. Yes, I know that most cars that were sold new in 1994 have been in the junk pile for years, but for me it's not an old car any more than my friends and relatives are "old" so it pains me to see it this way. It's got 147,000 miles on it now. Mechanically, it's pretty good but the paint is just about shot and there are a couple small dents. The interior is clean but starting to show some wear. A couple years ago I made new door panels with new ABS plastic door cards because the original cardboard door cards were rotten and falling apart due to some water leakage into the doors. So, the car has been maintained and is still worth keeping and maintaining. To that end, I'm undertaking some renovations. If you look back about 5 years in this blog you'll see the last time I undertook some renovations, but back then it was installing a supercharger.

The supercharger only stuck around for a couple years. I really didn't enjoy it very much and as a result I never drove the car. In the year 2006 I put less than 1000 miles on it. Once I got rid of the supercharger the car became my primary commuter again, and my (then) Corvette and my (now) M3 became my "nice" cars that I only drive when I want to look good or be comfortable. Now I'm putting well over 10,000 miles a year on the car. So that's the back-story and why I'm putting a bunch of work and probably a bit of money into a 17 year old car that's probably only worth $3500 or so. 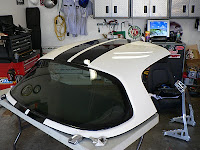 Today the project began. One of the worst problems the car has right now is a water leak into the trunk due to a leak in the rain rail. I'd like to fix that but I don't want to install a new soft top. The current soft top was installed in 2001. I just realized that was 10 years ago. HOLY CRAP where does the time go?
... now where was I? OH YES, the soft top is leaking into the trunk. Leaning up against one wall of my garage for the past year has been a hardtop for my ex's Miata - the white one with black stripes that you see elsewhere on this blog. She doesn't use it because it rattles and she likes to put the top down a lot. I can't use it because it's white with black stripes and would look ridiculous on my red car. I want to get my car painted but I'm not ready to do it yet, so I figure that if I can do a relatively quick DIY paint job on this hardtop and just paint it black it will be passable for now and buy me some time until I can get the whole thing painted red again. Putting this top on will stop the leak into the trunk and also make the car look a bit racier. I never put the top down anyway so I may completely remove the soft-top and bolt the hardtop on. So I've ordered some black paint and clearcoat and I'm going to have a go at painting this hardtop in my garage. It will probably turn out awful but it should be fun and cheap so I'm diving in. 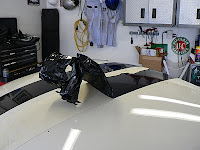 So the black stripes on this white hardtop were applied with vinyl. My goal for today was to remove the vinyl and prep the top for paint. I thought it would take an hour, maybe two. Since nothing in automotive life is simple or easy, of course it took way longer. 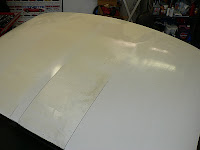 When the vinyl came off, it left a metric CRAPLOAD of adhesive behind on the paint. Not just any old adhesive, no, this stuff was tenacious! After experimenting with an array of household chemicals and mechanical means to try to soften and strip it, I arrived at a workable solution - mineral spirits and a medium stripping pad (the kind you use to strip paint or varnish from wood). It worked, but SLOWLY. 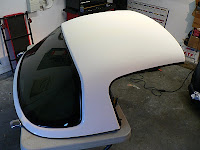 The next step was to sand the top, getting the last remnants of the adhesive off and prepping the surface for primer. I'm doing this job on the cheap but I want to try hard for a good result and hopefully learn a thing or two. I've done paint work before with mixed results and continue to have an interest in learning to do it well. I sanded the top using a rubber 3M sanding block with 320 grit dry paper. I also used a little 150 grit where the vinyl adhesive was being stubborn. Tomorrow I'll lay down a few thin coats of sandable primer and finish that with a 600 grit wet sand. Then I'll be ready for the base color coat. HERE and HERE are the follow-up posts to this one.
Posted by Morrison's Garage at 9:02 PM