I finally got around to working on the suspension on the Miata. Back in June I bought the VMaxx Classic coilover kit from Flyin' Miata, and in September I actually installed it. I won't go into the specifics of how I did it because there are hundreds of write-ups all over the net about it. Since both my lower ball joints and outer tie rod ends were completely shot, I replaced them as part of this, too. 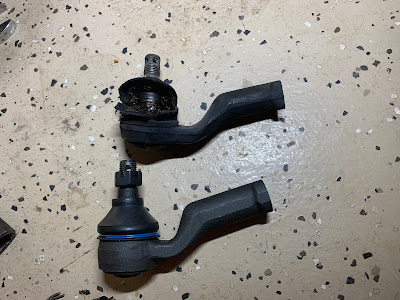 Here you can see just how bad the tie rod ends were with almost 180,000 miles on them. Top is old, bottom is new. I sourced new ones from supermiata.com. The lower ball joints were just as bad. I bought new Proforged ones ones from Rockauto.com. Sorry I didn't get a good photo of those. 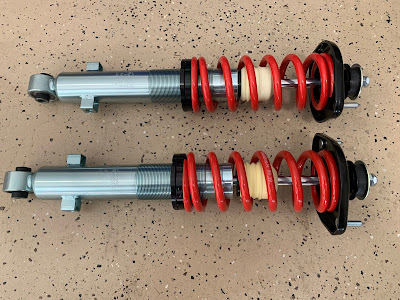 Here are the front VMaxx units. Very nicely built and Flyin Miata supplies the needed parts to convert the NA to the better NB style top mounts. These don't come assembled so there is a little extra work to put these together and torque the top mount bolts down, which can be a bit tricky but is not too bad. 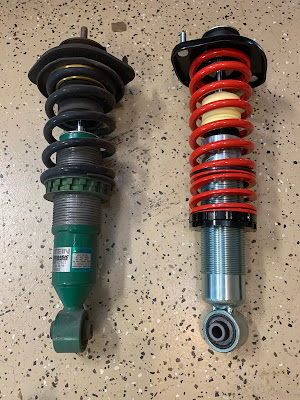 Here's a rear assembly alongside the old Tein unit that was on the car. These were installed in 2004, so they were getting pretty long in the tooth. You can see the Tein uses a much shorter spring and has the old NA top mount. I do think the VMaxx design with the NB mounts is much better. I think the VMaxx would be fine without the tender spring, but there it is and maybe it has some small benefit. 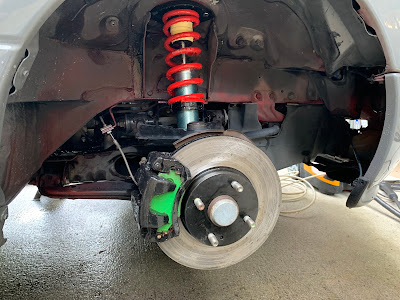 Here's a front unit installed and you can see that while I was in there I decided to replace the brake rotors and freshen up the calipers with a coat of paint. I used some caliper paint from POR-15. The rotors are from Centric and have the center hat already painted black. I did this at all four corners and also took the opportunity to lube all the caliper slider pins. I put the same pads back in as they had plenty of meat left. I wish they weren't green. 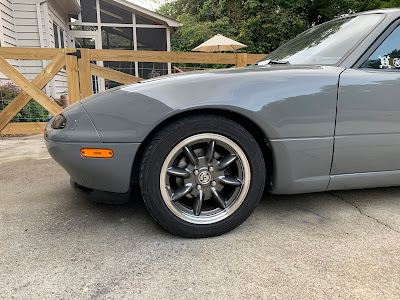 Just to show where the ride height ended up. The FM instructions say to start with the fronts at 9 inches from the lower mount bushing centerline to the bottom of the spring perch, and 5 inches in the rear. That put me pretty close to stock height, and not as low as I wanted to be, so I moved the spring perches down about .75 inches and it's pretty good. I could go a lot lower but don't want to. 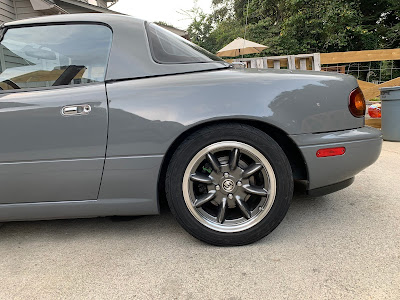 Driving impressions: I've put a few dozen miles on the car since this was done and I'm very happy with it. The ride on the VMaxx Classics is supple and just firm enough to know it's a sports car. Sawing at the wheel doesn't upset it at all and with the new ball joints there is a lot less clonking going on. Bumps don't upset the car nearly as much. The brakes feel better and the car just feels finished. For the first time in 3 years, this feels like a car I can put my wife in and we can go somewhere without feeling self-conscious.