So my Cayman has 43,000 miles on it and it's 11 years old. Normally I wouldn't be worried about a water pump at this point but I keep reading the experts on the internet saying you should replace the water pump every 40k miles. I think this is *incredibly* conservative but given the cost of repairs to an M97 engine, I'm ok with erring on the side of caution. So I decided to go ahead and replace the water pump and thermostat. Once I got into the job, I thought the coolant hoses looked a little old so I replaced those, too - or at least the ones in the rear of the car that supply coolant to the big aluminum pipes that go up to the radiators in the front, and to the heater core. 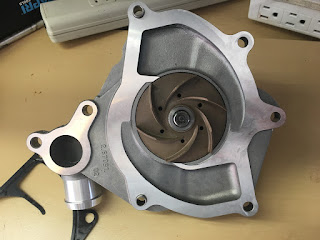 Pierburg water pump from Pelican Parts. They are an OEM supplier, so this pump is exactly the same as the original. The impeller is composite plastic, which is what you want. 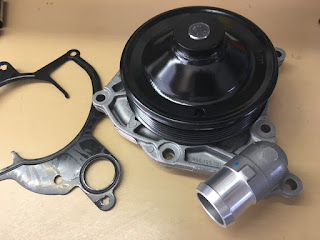 It came with a new gasket, which was not clear from the Pelican Parts catalog, so I bought a separate one too. To remove the pump, take off the cover under the front of the engine, drain the cooling system and remove the hoses that are in the way. I planned to replace all the hoses so just cut them off to make removal easier. I didn't want to risk damage to the aluminum coolant tubes so I gently slit each hose for easier removal. After 11 years they were stuck pretty hard. The water pump is held on with six small bolts, with 10mm hex heads. They are very easy to remove. The thermostat is held on with four E10 external torx bolts. A couple of them are pretty tricky to get to so have a variety of extensions and a swivel on hand. Only one of the water pump bolts was hard to get to.

I'd rate the difficulty level of replacing the Cayman's water pump and thermostat as a 3, where my Miata is an 8 and my E46 M3 was a 7. The hardest part is getting all the covers off! 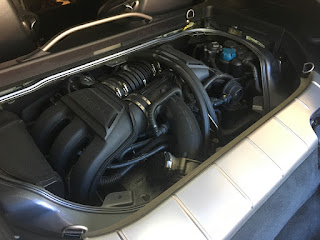 Top cover off. The only reason to remove this cover for this job is when you fill the cooling system you need to open the bleed valve. The front cover behind the seats needs to come off too, to make access to the water pump easier. You can probably do it all from below, but much easier with access from the front as well. 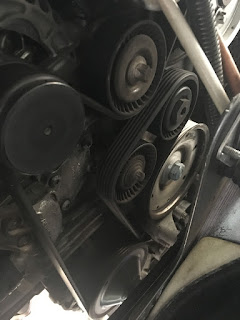 I took a photo of the belt routing to ease reinstallation of the belt. I actually bought a new belt but opted not to replace it yet because this one looked fine. The tensioner pulley is the one directly above the crank pulley, with the 24mm hex head. Wrench that clockwise to release the belt tension. 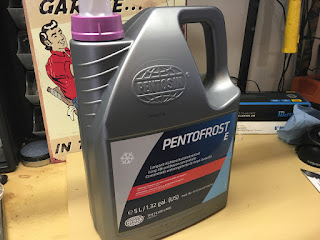 Ok, so here's a thing I learned. The Porsche branded antifreeze is ridiculously expensive. Normally I would just suck it up and pay the money, but this rubbed me the wrong way. There's just no way the Porsche stuff is that special. So, I did a bunch of searching, finding references in the forums about what the Porsche antifreeze really is, and the specs it meets. I crossed referenced those specs with products I could find for sale with published spec sheets, and I believe this stuff pictured here is essentially identical to the Porsche coolant. It's still more than good old Prestone, but half the cost of Porsche. It's made in Germany, it's pink, and it's available on Amazon. 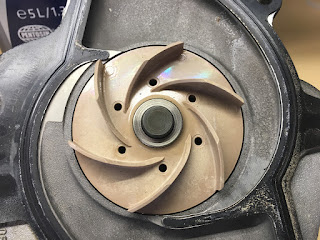 Here's the old water pump with 43 thousand miles on it. I was a bit premature replacing it. There was no play in the bearing. Would have lasted quite a bit longer. 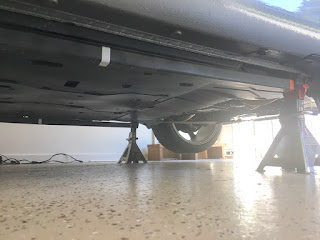 Another slightly tricky thing with the Cayman (and the Boxster as well), is getting it up on four jackstands. When I had the 986 Boxster S, I was able to do it without anything special, but it wasn't fun. For the Cayman I decided to make things a little easier on myself. To that end I bought Lift Bars and they definitely make lifting the Cayman safer and simpler. The bars just plug into the factory lift points and you can jack one whole side of the car at a time. Your jackstands go under the liftbars. The lift bars are hand made to order, and well worth the cost for the added peace of mind and safety. 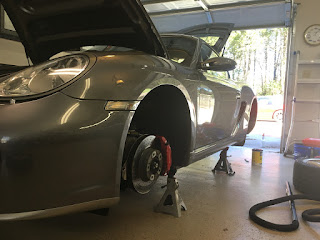 Sorry for my lousy photo of the liftbars. Just visit their website and it shows them much more clearly.

Finally, the hardest part of this project was filling the cooling system. I drained about 4 gallons of coolant out, so there was some still in there, but not a whole lot. I used distilled water in a 1:1 ratio with the Pentofrost E coolant. I found a write-up on how to fill the system here and it worked well. It just takes a lot of repeated burping and topping up. A week after I changed the water pump I put 1100 miles on the car and it performed flawlessly! 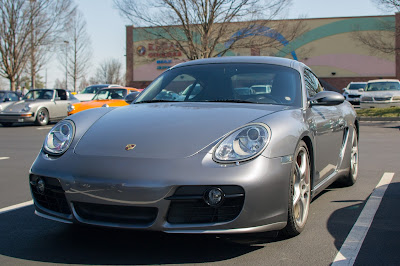 Here's another pic for grins.
Posted by Morrison's Garage at 1:51 PM