Time to finish up the story of my engine rebuild in the 1994 Miata. The first part of this is here, here is part two and part three. The images that follow are roughly in chronological order, but not exactly. I'll just briefly explain each photo so you'll know sort of what's going on. My purpose here is just to let you know what you're in for if you're doing this, not explain exactly how to do it. 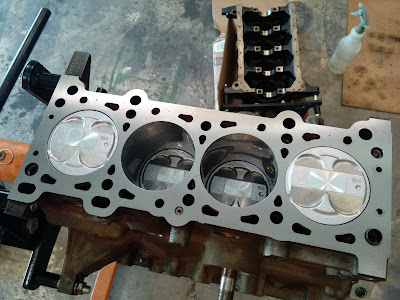 Once the pistons were all assembled and installed, and the rod bearings installed and torqued down, it was time to build the motor up. Here you can see the tops of the '01+ pistons. If you were to compare to the '94 pistons you'd see these are a bit more domed on the top, which is what provides the additional compression. You can also see where they are marked as oversize with the 0.50 stamp (upside-down in this image). 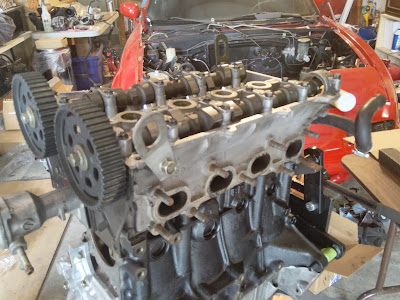 The next step is to plop the cylinder head back on the short block. I didn't get a photo of the head gasket installed but there's nothing tricky about it other than to make sure you don't block the oil feed to the head. There's only one correct orientation for the head gasket. I didn't disassemble the head for this rebuild since it was just refreshed about 25k miles ago. 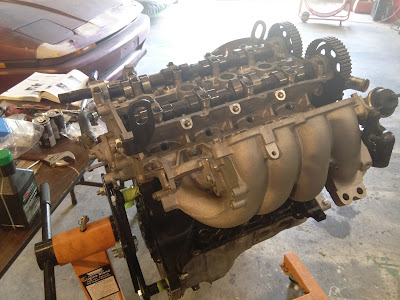 Next the intake manifold goes back on. 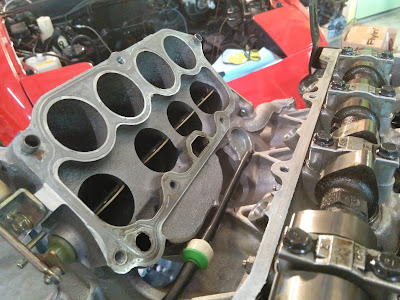 This photo shows the VICS butterflies in the '99 intake manifold. You can see by default they are open. I don't have a way to control these yet so for now I opted to wire them shut. Even though I don't get the (admittedly miniscule) benefit of VICS, the '99 head still flows tons better than the '94 head and also has the solid valve lifters that are much less problematic than the HLAs of the '94. 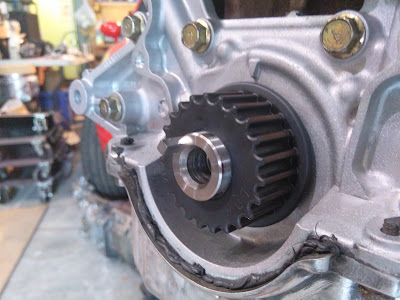 Next I assembled the crank nose with the timing belt cog and a new key. You can also see the new oil pump I installed and some of the sealant spooging out from the front of the oil pan. I had to trim away this excess sealant as it interfered with the pulley boss a bit later. 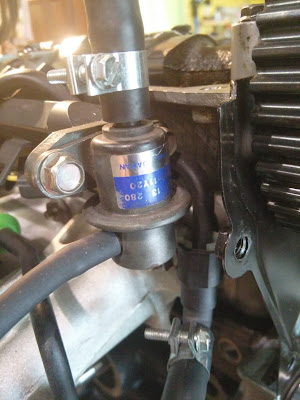 This photo shows the orientation of the fuel pressure regulator and the new fuel hose connector to mate the '94 fuel system with the '99 fuel rail. This is discussed in great detail in an earlier blog post but since I got this better photo I wanted to include it. 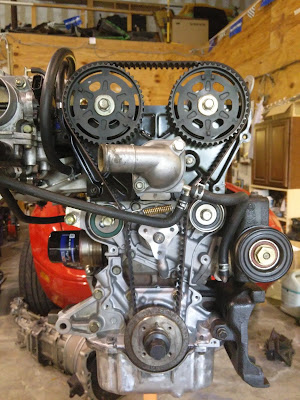 Keep building. Here the timing belt and water pump is installed, also the throttle body, thermostat, some coolant hoses, and the A/C belt idler (my car has no power steering pump). 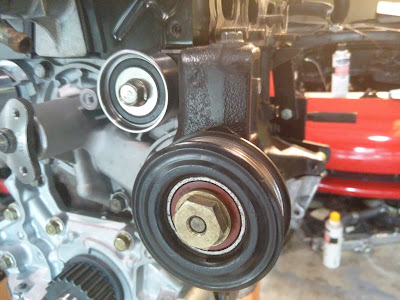 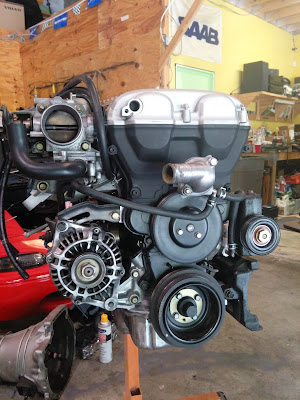 The front of the engine is pretty much fully dressed. The alternator is in place, the water pump pulley, and crank pulley. 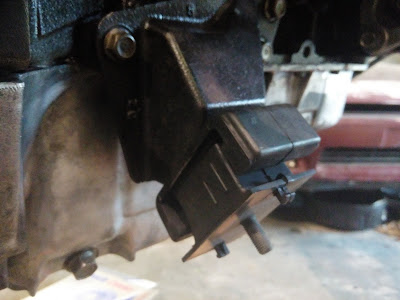 Motor mounts are next. I went back to the standard mount after having Mazda Competition motor mounts for a few years. I didn't like the extra harshness I felt while driving with the competition mounts. If this was a track car it would be different. 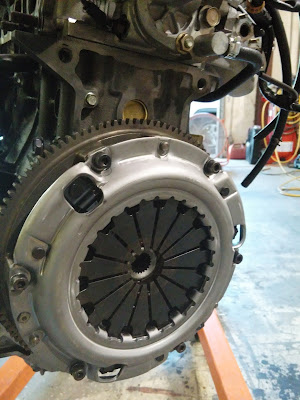 Next I bolted on the flywheel, clutch, and pressure plate. I didn't get any photos of it! I used my trusty Flyin' Miata crank nose tool to lock everything in place while torquing things down. You can see I substituted some grade 10.9 cap head bolts for the original bolts here. No reason to do that if your old bolts are in fine shape. 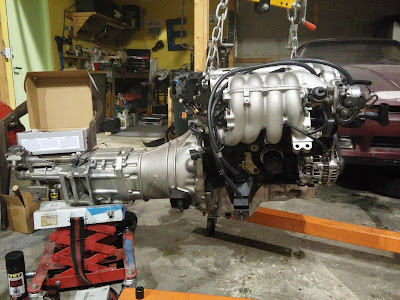 Next is to mate the engine and transmission. This is much easier to do on the floor of the shop than under the car. I used the crane and the transmission jack to maneuver them in place, then just let the bolts do the work. Now it's time to fly the engine into the car. 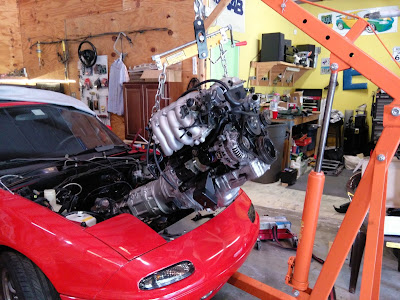 This part was a lot harder than it looks. A helper would be very..uh...helpful right here. I was wishing for a bigger crane because this one couldn't quite reach far enough. Note I have a leveler. This is crucial for getting the whole assembly oriented and dropped in place. You have to work in fractions of inches while constantly making adjustments to the attitude of the assembly. Once the motor mounts engage with the holes in the subframe you are home free. Don't forget to reengage the driveshaft with the tail of the transmission as you move it back or you will have to do like I did and unbolt the driveshaft from the differential so you can plug the nose back into the transmission. No big deal but an unnecessary step if you think ahead. 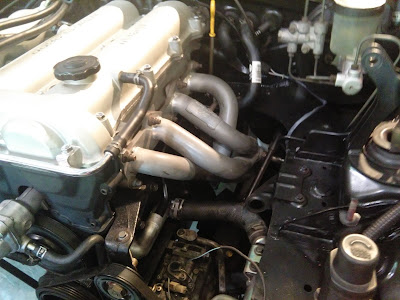 Finally when the engine is bolted in you can start hooking everything back up. The exhaust manifold, hoses, wiring harness, radiator, A/C compressor. Everything you had to unhook before. Refill the transmission with gear lube. You'll probably forget something and wonder why the car won't start. Just be methodical and it will work out. Don't take shortcuts and don't skimp on parts or tools.

Now that this is done I'm very happy with the engine. It definitely has a lot more power than before, and runs smooth as butter. Now I have to bring the rest of the car up to the standards of this motor. It never ends. Hope you enjoyed this series of posts. Sorry they were so far between.

Posted by Morrison's Garage at 6:06 PM