Since my last post I've removed the engine from the car and disassembled it. I was hoping to be able to simply hone the cylinders and put the engine back together with new rings and bearings, but I found there was too much wear for that. I didn't even make any measurements. There's obviously a lot of scuffing on the piston skirts and there are enough scratches on the crank journals that I figured I'd better have it polished and maybe even ground down one size if necessary. So off to the machine shop it will go this week. I'm taking them the block, rods, new pistons, and the crank from a spare 2002 engine I previously tore down. Here are a few pics of the pieces. 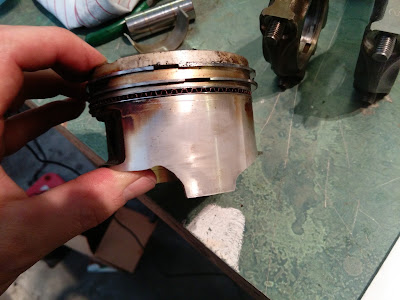 In this photo you can see quite a bit of scuffing on the piston skirt. The oil control rings on all these pistons did not appear to be stuck, so I believe my oil consumption issue was simply due to wear in the bores. 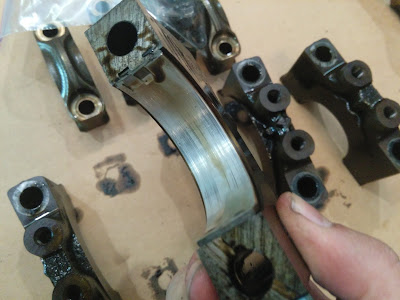 This is one of the main crank bearings. It's probably the worst one but they all looked similar. It's not the worst I've seen, but you can tell this is an engine with 175,000 miles on it. It's worse than I expected it to be. This engine has always had synthetic oil in it, and although I've pushed the change intervals pretty long a few times, it's had regular oil changes. I chalk up the increased wear to several factors, though. 1) I had a very crappy cold air induction system for several years that didn't filter the intake air very well. It was an oiled foam filter and several times I found actual grit in the airbox. Most of the bearings showed deep scratches indicating large particles in the oil. This is usually due to ingested silicon grains. 2) I had a supercharger on this engine for about 10000 miles, and 3) this engine saw some track mileage where it was at very high rpm for extended periods of time. 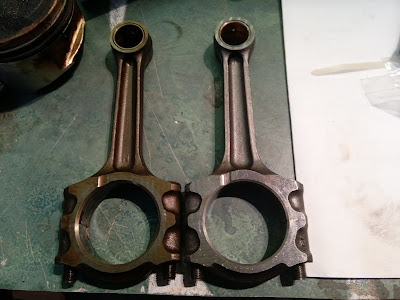 On the left is a rod from the '94 engine and on the right is a rod from the 2002 engine I previously tore down. I didn't weigh them but to me the 94 rod looks like it might weigh a little less. The webbing on the I-beam portion of the rod is definitely thicker on the 02 rod. Maybe they beefed them up in later years to compensate for the higher compression the NB engines run. At any rate, I decided to stick with the '94 rods for my rebuild. I'm sure they're still strong enough and I just thought the construction looked a little better. If I was going with forced induction I'd probably use the '02 rods. 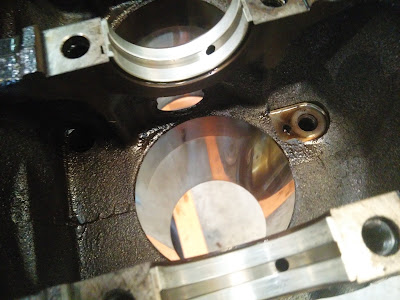 I bought some new pistons in 0.5mm oversize (83.5mm) because I figure it's safer to oversize rather than just hone this block, based on the amount of wear I'm seeing. The bores in the block look pretty good, but the amount of scuffing on the old pistons tells me there's gotta be some wear. So just to be safe we're going to overbore. 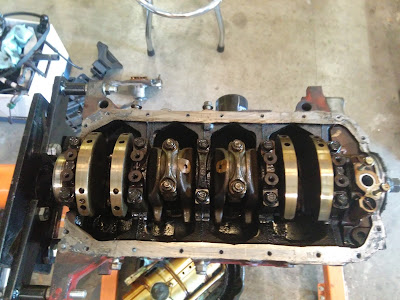 This pic just shows the crank still assembled to the block. The main bearing caps are stamped with numbers 1 through 5 and there are cast arrows indicating the direction to the front. The numbers are hard to see but they are there. I elected not to use this crank and will instead use the one from the 2002 engine I took apart because that one looks brand new and this one shows some wear on the bearing journals and seal surfaces. 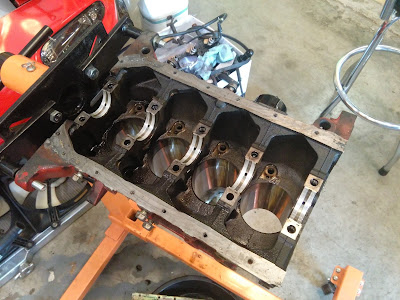 Here's the bare block in all its glory. Not much to it when it really comes down to it. Part three of this series is here.
Posted by Morrison's Garage at 8:05 PM