I've owned this 2004 BMW M3 for well over five years now. It had 82,000 miles on it when I bought it in 2009 and at the time of this writing has just over 128,000 on it. I got it completely caught up on maintenance when I first got it, but other than regular periodic maintenance, it's needed very little else in that time. The only unplanned repair it has gone down for was a seized front brake caliper which I replaced. At this mileage, though, I know I've been driving on borrowed time for a while. The E46 does not suffer from the same cooling system weaknesses that the E36 did, but it's still a very critical system on the car and the consequences for poor maintenance are dire. So I decided it was time to completely go through the cooling system and renew everything I touch.

As usual with my blog, this is not a how-to. It's a you-can. There are plenty of forum posts and blog entries elsewhere that will tell you everything you need to know to complete this maintenance.

I started with an order of parts from ECS Tuning.

This order with shipping came to $710. 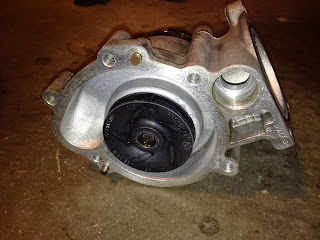 Thankfully the water pump for the M3 has come down a LOT in price since a few years ago. It used to be over $500. This one was $300 and I've seen a few other cheaper options as well. Shop around. Make sure you get a pump with a polymer impeller. It will last forever. The front bearing of the pump will wear out, not the impeller. If you get a metal impeller I can't say the same will be true. Here's a pic of my removed water pump (right). The impeller is perfect. This pump was not leaking but the bearing is pretty loose. This also shows how well the BMW coolant protects the engine from corrosion. There simply is none.

To start I removed the lower engine shield, fan with clutch, fan shroud, intake filter housing, hoses, belts, and finally the radiator. The lower radiator hose was impossible to get loose from the rad so I left it in place and removed both through the bottom of the car. You have to move the oil cooler out of the way but you can leave it attached. Support it with something so it's not hanging by the oil hoses.

When removing the thermostat housing there's a coolant pipe that runs between the housing and the bigger pipe that runs to the back of the engine. It's about 2 inches long and machined from aluminum. It is sealed with O-rings (#11537830709) on both ends. Mine pulled free from the engine end, not the thermostat housing end, and thus the whole housing was too big to remove from the space it occupies. I had to work for quite a few minutes to get the pipe loose from the housing side so I could remove it. Most write-ups I've seen don't tell you to remove that pipe at all, but there is an o-ring on the engine end that you should replace as well, so it's just as well that it came out that way.

Once the thermostat housing and thermostat are out of the way, you can unbolt the water pump. A firm pull disengages the pipes on the back side and it easily comes out.

At this point I assessed where I was and decided I needed a few more parts to do a more thorough job. Again from ECS, I ordered: 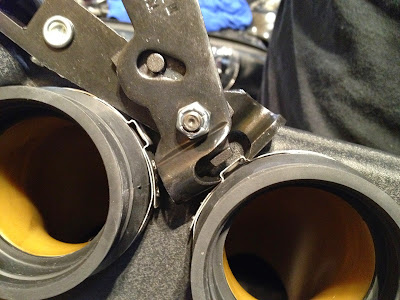 Replacing the heater hoses requires removal of the intake manifold. Due to the M3's six individual throttle body design, there are six individual hose clamps to remove. The factory clamps are Oetiker-style clamps that require a special pair of pliers to remove without destroying them. The Lisle 30500 CV Boot Pliers will do the trick. Using the pliers I was able to remove the clamps without damaging them. The intake manifold, having never been removed before, was very hard to dislodge from the throttle bodies. The throttle body boots are pliable rubber, but were VERY stuck. Rather than risk breaking something, I opted to carefully cut the boots with a knife and pry them loose a bit. After unclipping all of the hoses and wires that run along and around the manifold, it finally came out. This means I had to order new throttle body boots, part #11617830265. About 17 bucks a piece. I also ordered new clamps for the manifold side of the boots (#11617830306). While the throttle-side clamps can be reused, the manifold-side clamps are one-time only. They're a bit over $3 each, and I had to buy a tool to crimp them, the Lisle 30800 CV Boot Clamp which was about $25 at Amazon (photo above). You can use traditional hose clamps, but these are simple and look factory. 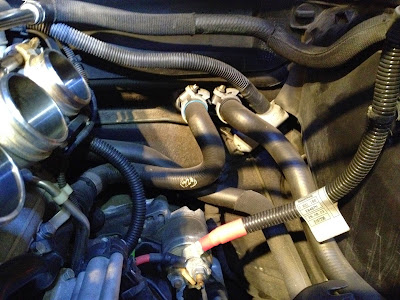 Once you have the intake manifold off it's easy to replace the coolant hoses that feed the heater core. There's one other hose that doesn't connect to the core, but rather connects the heater valve to the back of the coolant pipe alongside the cylinder head. I found it rather hard to find the part numbers for these hoses. Even ECS's website doesn't tell whether they fit the E46 M3 or not. They do, and the correct part numbers are in my list above. The photo here shows them fairly well. For what it's worth, my original hoses were still nice and soft, and looked pretty much like new. I think I could have easily gone another 50k miles on them.

Once I had the hoses replaced, everything went back together quite quickly. Access to the cooling system on the M3 is very good and doesn't require many contortions (except for those three hoses under the intake manifold). While I was in there, I also replaced the main serpentine belt tensioner spring and pulley. I had bought them a long time ago so they are not listed in the parts list above. The bolts that hold the water pump to the block should be tightened to 7 lb-ft of torque. That is NOT VERY MUCH. I don't even have a torque wrench that will read that low. I used a 1/4-inch ratchet and very gently torqued these bolts down. The bolts that hold the pulley to the water pump snout are also torqued to 7 lb-ft. Be careful!

Posted by Morrison's Garage at 1:30 PM