So for the last couple weeks I've been getting to know this '92 Jeep Cherokee. I've never had a Jeep before and I really don't know anything much about 4x4 vehicles in general. I've got a lot to learn. But first things first - this thing has 174,700 miles on it and needs some TLC. 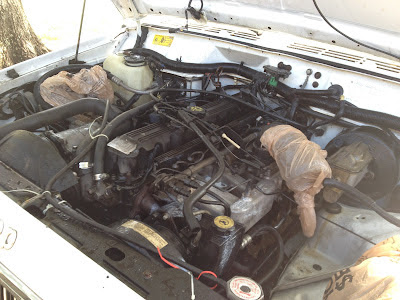 As usual I'm not terribly disciplined when it comes to taking pictures of my process. So this post is a bit random in nature. I've not done anything complicated or difficult, though, so there's not much to document. This pic shows the engine just after I started pressure washing it, which was the first thing I did. It improved the grime situation considerably, but there's still a lot of filthy areas I haven't got to yet. 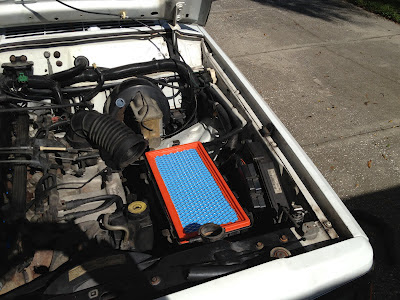 I installed an Amsoil EaA air filter in place of the old filter, which looked to be a K&N oiled gauze filter. The Amsoil will filter much better in potentially dusty environments. The same day I did this I also installed all new hoses and flushed the cooling system. I pulled off the valve cover and painted it and put it back with a new Felpro gasket because it was leaking badly and making a big mess of the engine. I also changed the oil and filter, using Amsoil ASL 5W-30 and an EaO filter. 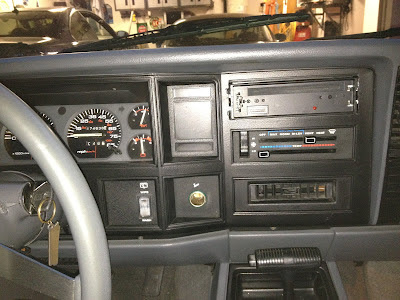 The instrument surround panel was silver and quite ratty looking. A few coats with some Duplicolor plastic/vinyl paint and it looks 100% better! I'll probably do a few other bits of the dash as well. Overall it's in decent shape. I got some LED's for the interior lights but they don't fit quite right. I'll have to modify the housings a bit. I also plan to strip the carpet and coat the floor with bedliner, recover the seats and redo the door panels with something less stodgy looking. 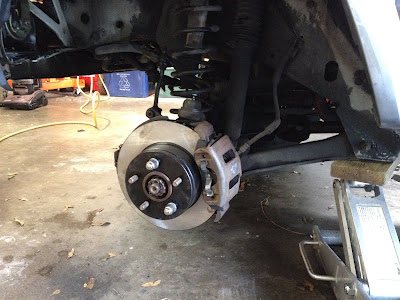 The front brakes were almost down to the backing plates and the rotors quite scored. The first time I drove this Cherokee I was startled by how bad the brakes were. So a set of Bendix CT-3 pads and a pair of Centric rotors went on the front. It definitely has helped, but the brakes are still not great. I discovered a big bulge in the side of one of the brake hoses, which would definitely ruin the brake feel and limit performance, not to mention the obvious safety issue, so new brake hoses all around will be installed in the next week or so. I haven't even looked at the rear drum brakes yet. I'm sure they'll need attention. 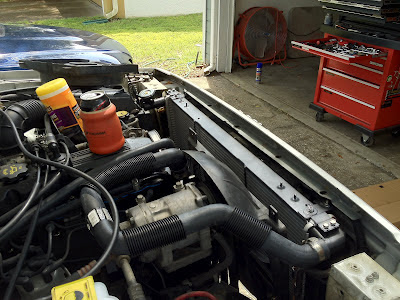 I drove the Jeep to work one day last week and my nose alerted me to a coolant leak. A quick inspection underneath revealed a leaking radiator. That explains why the cooling system had no antifreeze whatsoever in it - the previous owner had just been keeping it topped up with water. So a quick trip to NAPA yielded a new radiator for just over $100 and I installed it today. 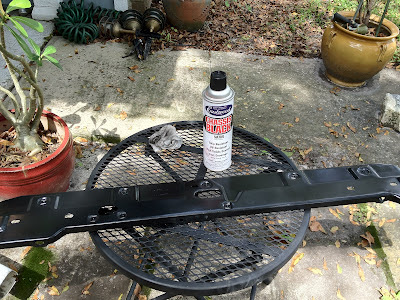 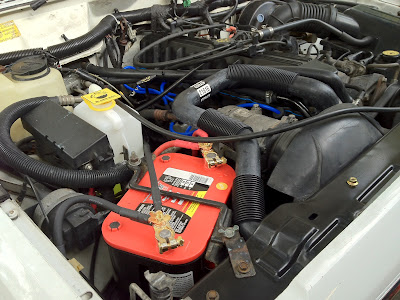 Also today I installed all new battery positive and negative cables that I got from a guy on the Jeep Forum. They're made with big 4 gauge wire and sized exactly to fit the XJ engine layout. I also threw in a new Optima Red Top battery to replace the pathetic Advance Auto "Economy" battery the XJ came to me with. Finally some gold plated terminals tie it all together and replace the old tired lead clamps that were original to the Jeep. They were so worn they would hardly tighten down on the posts anymore. I also installed a set of new 8mm silicone plug wires and a distributor rotor and cap from Summit Racing. 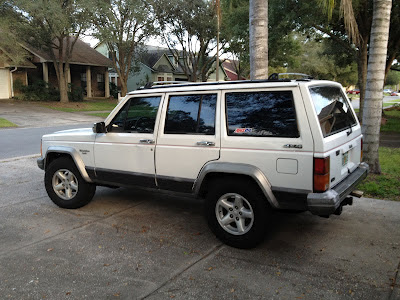 Here's an external shot. I haven't really done anything to the exterior yet. After this photo was taken I yanked off the rubber moldings on the lower panels. I'm going to clean that area up and coat with a bedliner type material.

I took the XJ out for a 45 minute drive this evening and it's definitely running better than it was when I got it. I certainly can't trust the brakes yet, but they are better. The ignition system seems to be working nicely now as well. It's been a bit hard to start a few times, especially after sitting for a while, so I'm suspecting it may have some leaky injectors. The truck drives just fine. It just needs a whole new suspension. On smooth pavement it's fine, but on bumps or broken pavement it just comes completely unglued. I figure the shocks are long gone. I'll be installing a mild lift kit with new shocks before too long anyway, so it's not a problem.